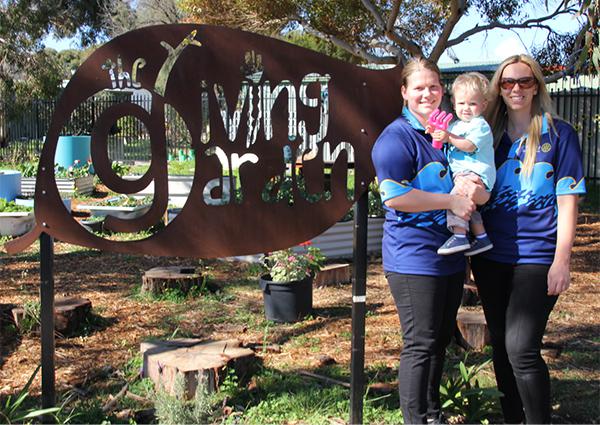 Every District is exploring what club structures will suit 21st Century conditions. Here’s a model that is far-out but thriving in a District beset by membership declines.

The one-year-old Rotary Club of Seaford, near Victor Harbor, SA, has tossed out old-style Rotary trappings and made itself female and family-friendly.

It has two-thirds women members, after being chartered by 29 year-old president Cecilie Cardwell. Current president is Hannah Trevilyan 34. About 90% of members are in careers rather than retired, and ages range from the 20s to 74.

Hannah, a real estate manager, says there’s no formality, toasts, raffles, sergeants, head table, bulletin or official bling. Guest speakers are invited to only a quarter of meetings, and then because of direct relevance to club operations.

The meetings’ cost for members is cut through bring-a-plate or optional meals. “Our dues are $200 but the big cost for most clubs’ members is the $1500 for meetings,” she says.

Cecilie thinks a club with many females is less intimidating to newcomers, especially as the women are so energetic about local community projects.

“I look forward to more families getting involved with Rotary and to us changing the old images with new ones filled with diversity and love,” she says.

Cecilie migrated from Norway in 2010, trained as a nurse and now works as a carer. She led the club’s creation while pregnant and normally brings her year-old son Archer to meetings – heading for a quiet corner if he gets noisy.

Cecilie launched the club last November with 21 members after two years’ preparation. She’d been a Rotaract member at Flinders University. Mark Huddleston, then D9520 membership chair, invited her to create a 21st-Century-style operation at Seaford where 30,000 people had no service club. Cecilie says, “I thought ‘Why not, let’s do it’. I’d already seen how Rotary people are so friendly, they’re almost like family.”

They letterboxed fliers and put inserts into the local paper, hung posters, turned up with banners at every community event, and blitzed prospects by phone and social media.

“We bought a $300 popcorn machine and it was a hit every time at events. We networked with other charities, especially the Aldinga Giving Garden which grows fresh fruit and veges for the needy. We didn’t just install a $580 rainwater tank that Bunnings donated; we put a huge poster on it about Rotary’s clean-water work overseas. Parents see it when they park for their kids.”

Mark Huddleston, who runs mail-order confectionery, says ten clubs in the district have folded in ten years, but modernising   clubs to bring in young people gets entrenched resistance. “It’s easier with a new club that starts on a clean page with no baggage. Newcomers love it. At just one meeting before we chartered, seven new members signed on.”

“On the surface, fast-growing Seaford looks idyllic nestled between the vineyards and the coast,” Cecilie says. “But when you scratch the surface, you find   food insecurity, domestic violence, homelessness and youth disaffection – all areas for us to help.”

The club organised a recent Seaside Walk on Suicide Prevention at nearby Onkaparinga, which mustered 400 people and raised $7000 for Australian Rotary Health.

Shifting meeting venues is nothing strange. The name ‘Rotary’ derives from the rotation of venues by Paul Harris’s original group.