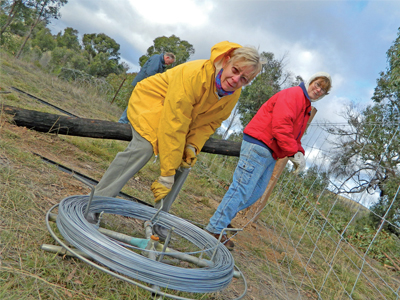 Work to be done: Shirley Roberts (right) and Anne Cross help with replace fencing at a Kilmore East property.

SHIRLEY Roberts provides an example of the significant contribution women have made to Rotary’s work.

As the wife of Rotary Bushfire Project Recovery manager Kevin Roberts, Shirley came to the fire affected regions in June 2009.

“There have been many females who have joined the men as volunteers and have worked very capably building and repairing fences, clearing fence lines, splitting wood and constructing homes and buildings,” Kevin said.

“Most importantly they are able to offer a friendly ear and show a lot of empathy and compassion to people who are still struggling to move on from this disaster.

“Shirley works with other volunteers until late afternoon and often returns to the team’s bunkhouse to prepare an evening meal for up to 15 people at a time.”

While she has found the experience rewarding, challenging and “and a lot of fun”, Mrs Roberts said there had been some emotional moments. Mrs Roberts has been associated with Rotary, supporting Kevin for more than 27 years. An honorary Rotary member for many years, Mrs Roberts joined the Rotary Club of Brownhill Creek in her own right two years ago.

Shirley was awarded one of Rotary’s most prestigious honours, a Paul Harris Fellowship, in 1992 and received a second award for her work in the bushfire affected areas of Victoria from Rotary District 9520 Governor Dick Cuttle in 2010.